This is the day 7 of the Danube program. In the morning we had a film clinic where the film we made is checked by the professional. The subject of our documentary can only speak well in German, and she spoke a German with a strong accent, which made it relatively difficult to translate and make a transcript. The German she spoke was Google translated, we did get a brief understanding of what she was talking about, but it was weird. We end up shortened the video to 3 mins 35 seconds, which was a big progress.

When my friends were in the film clinic, I went to look upon the foreigner talk we are going to do later in the day. I will be in the front of the panel with my history friend, so we got to work it out.

Later we had a language session with Tina, although I can see my language sense in German is getting better but still lost the track sometime. I am still writing the Chinese pinyin and Japanese Katakana under each line of German to assist the pronunciation. The words in German are so long and hard to pronounce. Then we tried to translate short stories in German which was like solving a code. I really should bring a dictionary with me.

In the afternoon is the highlight of the day, the students’ panel on “Foreigner Talk Workshop”. From most of the team 2 people went to the front and so about 16 in total are in the front. Other group started their 5 mins talk. The format of the talk was unexpected. I thought it is going to be a question-and-answer session but it was not. So actually I was preparing the script on the stage when other groups were speaking. It freak me out especially when that girl from Yiddish (?) group make the talk like a speech for an election campaign. People were so good at public speaking.

The speech went well I would say. I talked more about how we found the subjects and how they reacted to it, and how I found the program itself overall. I said it has been quite interesting to know about the culture in the Eastern Europe and it actually has encouraged me to travel there sometime. I talked about how much we have travelled to find an Austrian and the numerous refusals we got, and an awkward moment when I invited someone for interview and we end up finding she was an Australian but not Austrian. The lady in the front asked me how those two sounds different in Japanese which I answered. Overall I think people have enjoyed my short talk. My history friend talked more into the contents of the interview which had more insight on the subject.

Then we had a panel discussion where initially the lady in the front said it is going to be 10 minutes but it ends up being 35 minutes long. People discussed what is meant to be a global citizenship and some people may would like to be but others may not. Then it is the whole lots I was not able to follow, what I think was that people were so intelligent in this room and that Linguistics talked too much.

After that discussion we went to the basement of Waterston where the picture exhibition was to be held. We say the portrait that we took. I was so proud of it. I would say that our picture is the most colourful of the all. I saw other pictures there as well but I think we took the best one. Alongside the portrait exhibition there was an art exhibition and another photo exhibition, and another lengthy research talk which I believe no one in that room was able to follow. There was a world map where you could put a pin on the place where you are from. It was so annoying that they did not draw Taiwan on the map. (Or they misplaced, but I think that was the place for Philippine) We had a picture with our picture at the end.

We had a Bulgarian barbeque outside the print room café later on, which my Bulgarian friend said it is just a normal barbeque. The cheese on the salad was Bulgarian, she said. Then we finished the day. 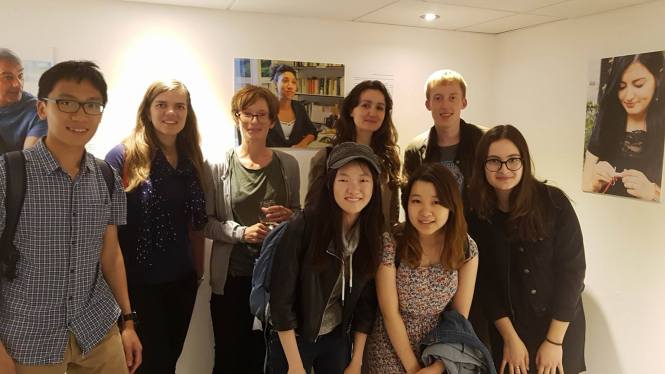