It quickly became apparent as I began my journey into Hungarian culture and Hungarian language, ‘magyarul’, that music holds an inseparable role within the nation’s identity. Before getting on to some thoughts on the music itself though I will first give you a quick overview on the more historical side of the custom.

Perhaps the most recognisable or prestigious of Hungary’s musical contributions can be found in its prominent folk tradition. Undeniably a significant feature in the country’s national image right up to this day as seen with numerous popular Folk dedicated Festivals, Hungary’s folk music also links back to significant events of its past, music offering a key window into political and social history too. For example the Hungarian folk music of the modern era can be seen to have begun with the eighteenth century Habsburg Empire or ‘Danubian Monarchy’. With Vienna held as the capital city for the majority of the Empire, increased authority of central European powers saw old free formed folk music largely eclipsed by more structured and regular metric beats for dancing or marching. This moulding of traditions was not all detrimental though, the Hungarian Roma in particular utilising the shift. Across this same period in the 19th Century their impressive string based orchestras became renowned and now many would say today that their sound is deeply engrained within, and even synonymous with, the folk music of Hungary.

Due to its Finno-Ugric and Eastern Turkish origins though Magyar music can also claim a unique existence due to the rich heritage of its people, different eastern undertones existing alongside more classically European forms, the notable stress on the first syllable of Hungarian words also contributing to the natural dactylic rhythm that identifies the national music. Aside from Folk music these features have also contributed to Hungary’s most notable classical composers such as Franz Liszt (https://www.youtube.com/watch?v=KpOtuoHL45Y) and many internationally acclaimed violinists including Leopold Auer (https://www.youtube.com/watch?v=QygG9ZFnmfk ) links to whose work I have included. After finding Liszt’s most famous works on Youtube I realised I was familiar with many of his pieces without realising it, perhaps illustrating how Hungarian, classical music at least, has pervaded far beyond national borders. Leopold Auer’s ‘Hungarian Dance G-Minor’ was on the other hand completely new to me and certainly helps appreciate the many different influences contributing to the ‘Hungarian Sound’, the building melody undeniably conjuring up the image of an ever quickening dance.

Hungarian music has not just been influenced by the rich heritage of its homeland however. Since joining the European Union in 2004 and after a surge of immigration post the 2008 global financial crisis so estimates have seen as many as 400 000 Hungarians move to London in the past six years. As a result of this there has been many cultural impacts including Hungarian music treading new paths, London in particular becoming a key host to a growing wave of Magyar Rock since the 1960s from groups like the more Jazz like ‘Locomotiv GT’ (https://www.youtube.com/watch?v=Wm1oJRCV8tY) to the more recent and hard core ‘Blind Myself’ (https://www.youtube.com/watch?v=r-vmZ2YShWE ).

In this way Hungarian music can be seen not only as satisfying the musical demands of Hungarians, but as being influenced by, and engaging with new more western audiences too. A good example of this growing recognition or popularity can be seen in the increased masses attending Hungary’s Sziget Festival. Back in 1993 the festival was simply a student gathering and yet now it holds claims to being one of the largest music and cultural festivals in the whole of Europe, with over half of visitors coming from abroad and one of my own friends attending last year. 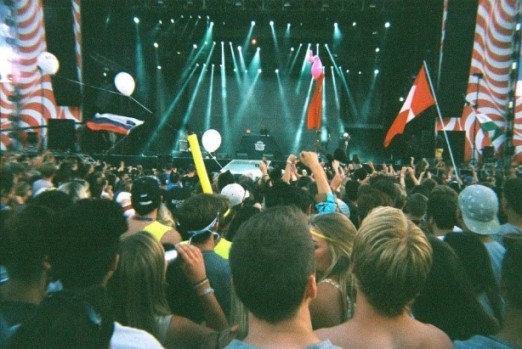 My friend’s images from Sziget festival.

Hopefully I have given a short taster into the diverse world of Hungarian music and its implications, music often being a product of its time and place, and perhaps have provided one engaging starting point to begin your own journey into a rich Hungarian tradition.