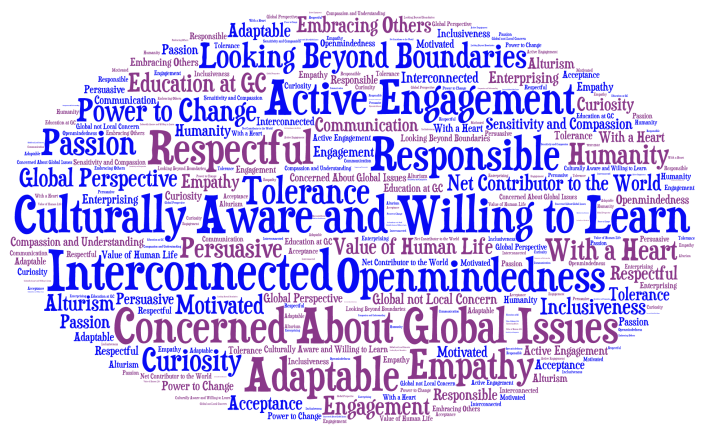 In the UnConference yesterday, we had several groups from different strands of the program presenting their views on global citizenship. Each group picked a statement from the list of words that we were given (see below) to portray their ideas of what it is to constitute a global citizen. In the Yiddish and Bulgarian language groups, “Active Engagement” and “Curiosity” were chosen respectively, while the group People-on-the-Sea chose to focus on the friction between global and local issues. An unusual method was used by the group Sustainable city, who divided themselves in several stake holders in Delhi (India) and convinced the U.N. (us, the audience) to have a vote in order to decide who should be entitled to the funding. Bulgarian group’s idea caused quite some discussions as “curiosity” sounded somewhat vague in terms of its practicality. Some argued that it’s not enough to have a positive impact as a global citizen, given that the pure desire of wanting to know or learn something doesn’t mean one will go and actually explore and learn such thing, hence there won’t be a change or improvement. However, the group pointed out that it is in fact a fundamental part of being a global citizen. The lack of changes and improvements are caused by ignorance and standoffishness, curiosity is the driving force behind all the great actions and as a result, this element is indispensable.

I, representing the Yiddish group was asked a rather tough and controversial question, that how can someone respect and tolerate something that they find abhorrent. That threw me off a little bit because I didn’t see that coming at all. Therefore my answer wasn’t as good as it could have been. Now when I look back, this is what I would have said: Global Citizenship is about working together with various kinds of people as a whole to solve problems and improve a community, a county or even the globe. If someone finds something abhorrent that they can’t respect or tolerate, does that mean we aren’t going to work with them? Or we are going to exclude them? This is where wars and conflicts begin, by not respecting the others, because everyone has their own say and opinion. It’s this diversity that makes this world so fascinating and wonderful. Understanding is the first step to lead to harmony. Let’s take the example here: I don’t understand why you would ask such question and I find it preposterous that you would ask it. Does that mean I have the right to refuse answering your question and completely ignore your presence? No. This is same as when you have prejudices and bias against other social customs and traditions. You choose to think the others are wrong and you are right. What I should do is firstly to understand the reason why you would ask this question by considering your background and experiences. We both have differences. By tolerating and respecting each other, we are giving each other a chance to communicate and to compromise. With these simple steps, we will gradually comprehend each other’s ground, therefore we’ll be able to find a subtler way to solve the problem.