In Britain we may be aware of Enlightenment thinkers such as John Locke and Adam Smith, whilst in France prominent thinkers such as Jean Jacques Rousseau and Voltaire spring to mind. In Serbia, it was Dimitrije Dositej Obradovic (1739-1811) who championed the age of reason, a period of reflection, free thinking and intellectual curiosity. Obradovic was a philosopher, a traveller, and the first minister of education in Serbia. He travelled extensively through the Balkans, the Levant, Imperial Russia and Europe-with a particular appreciation for England and the English. Much of his knowledge, patriotism and drive for national unity within Serbia stemmed from his travels abroad, which makes Obradovic a fascinating Global citizen to look at. 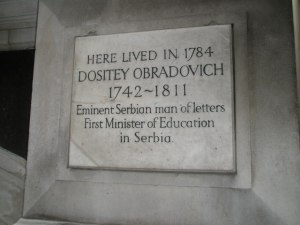 Whilst travelling Obradovic learnt a variety of languages, namely Greek, Italian and Slavic languages. It was his journey to Vienna in 1771 in which he first came across notable works of the Western Enlightenment, such as those by Immanuel Kant and Friedrich Hegel. This was to influence his own writing and his aim to improve Serbia’s educational system, and increase his peoples cultural awareness. His biggest contribution was reforming the Serbian popular language. There were three dialects used in Serbia: Russian Church Slavonic (upper class), Slavenoserbski (educated persons) and the local Serbian vernacular (illiterate masses). As the local Serbian language was spoken by all three classes, whereas the former two were not, Obradovic sought to unite the Serbs using this one national language. He translated books in the local language for example Aesop’s Fables (1788) and by doing so reached various segments of the population. To this day he is celebrated as a founder of Serbian literary Modernism, and he is responsible for the newly developed Serbian national consciousness and pride. 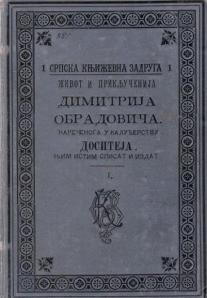 When reflecting on Obradovic’s achievements within Serbia I wondered what is a ‘national identity’ and does being a global citizen promote or hinder that? Well, a national identity can be described as a shared tradition, culture and language by a group of people, and being a global citizen does not mean you have to relinquish your identity and adopt another one. As Obradovic has shown, one can explore other cultures, learn about new traditions, and identify with other sub cultures in order to enhance your own identity. In this case he united the Serbs in a national identity with a common language. Obradovic therefore is a great example of a global citizen that travelled, observed, thought and acted in that order.