Literature has been one of the greatest forms of communicating culture since some of our earliest civilisations. Greece had the Iliad and the Odyssey, China had the I Ching, and Britain had Tony Blair’s The Third Way. It is something that I believe has, or had, immense power in cultivating public sentiment or furthering political or philosophical ideals. Whilst this importance is somewhat dwindling today, literature can still be used to offer glimpses into past struggles or seemingly otherworldly cultures, and an understanding of literary pasts helps shape an understanding of the world around us today. Literature allows societies to comment on all aspects of life, be it culture, politics, or the people, or it could simply be a means of producing art, and as such can have wide-ranging influence and impact.

The man responsible for allowing such commentaries to happen in Ukraine was Тарас Шевченко (Taras Shevchenko). His collection of poetry, Kobzar (1840) sparked a surge in nationalism and a realisation of the poor economic conditions of the lower classes. He was a constant problem for Russian authorities, getting compulsory military service for his poems Dream, Caucasus, and Epistle, which dealt with Russia’s treatment of Ukraine and suggested revolution as a possibility. The latter, which has a much longer name (To my fellow-countrymen, in Ukraine and not in Ukraine, living, dead and as yet unborn my friendly epistle) makes the case for Ukrainian nationality clear. If the title didn’t express it clearly enough, the closing lines do:

Our poor, tear-stained mother!
With hands that are firm and strong
She will bless her children,
Embrace her helpless little ones,
And with free lips, she’ll kiss them.
And those bygone times will be
Forgotten with their shame,
And that glory will revive,
The glory of Ukraine,
And a clear light, not a twilight,
Will shine forth anew…
Brothers, then, embrace each other,
I entreat and pray you!

With such powerful lexical choices and a strong fraternal sentiment, Shevchenko paved the way for future Ukrainian literary expression, and gave Ukrainians the idea that they had things to say and that they should distinguish themselves.

Shevchenko’s legacy can be seen in Ukrainian literature throughout the 20th century, as it primarily dealt with social and political issues. After experiencing brief freedom after the collapse of the Russian Empire in 1917, there was a short-lived renaissance in Ukrainian literature, incorporating experimental styles such as realism, futurism, and neoclassicalism. One pioneer of the modern novel in this period was Валеріан Підмогильний (Valerian Pidmohylny).

His novel Misto (‘The City’) featured elements both old, such as assessing two worldviews and contemplating the question of being, and new, like delving into the psyches of characters, a trait which is commonly attributed to the postmodern movement. Pidmohylny did not stand alone. Organisations such as VAPLITE (Free Academy of Proletarian Literature) sought to further the Ukrainian literary scene through adopting aspects of Western culture whilst retaining communist ideologies (although not propagating them through literature), and MARS (Workshop of the Revolutionary Word) wanted to offer honest representations of the times.

Much like the Jazz age of 1920s America, this cultural flourishing was cut short in the 1930s. The Communist party had monopolised literature, and writers had to join the Writers Union of Ukraine, leading to most writers acquiescing or being imprisoned and sometimes killed. As a result, the once varied styles of Ukrainian literature fell to Stalin-approved Socialist Realism, leading to novels that went against the old ideals of VAPLITE and propagated the greatness of life under the communist regime. Hope survived, however. Writers such as Olena Teliha stood out, writing in a nationalist style to emphasise Ukraine’s identity. Teliha headed the Ukrainian Writers’ Guild and refused to go into exile despite the dangers associated with writing nationalist pieces such as her Answer, which contained revolutionary sentiments such as ‘take up weapons from your hand/ And strike hard where a hard strike is needed’. There was not much success with such resistance domestically, but pro-Ukrainian sentiment survived through diaspora literature. There was such an influx that it has been referred to as a ‘minor renaissance’, lasting from the 1930s to the early 1950s, where many writers had relocated to the US.

(Socialist Realism in the Soviet Era)

The position of Ukrainian writers in this period mirrors that of the Roma today. The Roma are seen as outsiders and ‘the other’, marginalised by society and usually looked at negatively. Whilst comparisons can be made, distinctions are also present. Although they mostly enjoy their distinct identity, Roma, such as the ones that Annabel Tremlett worked with, do want to be assimilated into wider society and not confined to certain jobs or discriminated against due to the colour of their skin. Ukrainian writers, on the other hand, wanted to remain distinct from the Soviet Union, which only restricted their potential and discouraged national identity.

Unlike the situation of the Roma, that of Ukrainian writers considerably bettered. Stalin’s death ushered in a period of greatly reduced literary suppression, allowing for the ‘sixtyers’ to revitalise all genres that were present in Ukrainian literature, which in turn spawned desire for change and national culture. There was still mass pressure from above, however, but many underground groups such as the Kyiv School of Poetry furthered Ukraine’s literary legacy. It was not until ‘perestroika’, the reform movement from 1985 to 1991 that decreased pressure on writers and allowed diaspora writing into the Soviet Union, that writers were again allowed a true breath of freedom that they once enjoyed. Since the Soviet Union’s collapse and Ukraine’s independence in 1991, censorship has been all but eliminated from Ukrainian literature, and writers began to talk about previously forbidden topics, with some even publishing their censored Soviet-era works in their full form. 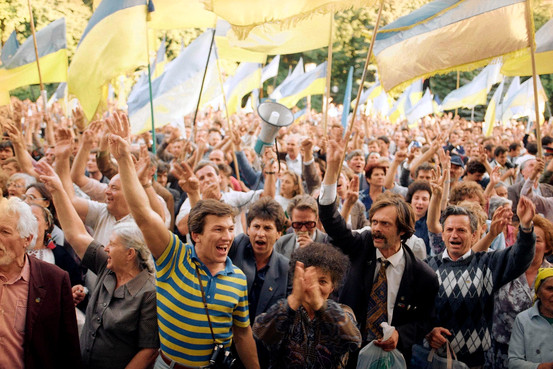 This journey from Shevchenko to suppression and then ultimately to success has made Ukrainian literature what it is today: experimental, distinct, and ambitious. Without the struggle for a distinctive national identity and a desire to work beyond the confines of the state-sponsored Socialist Realism, the picture may be very different. But what we can see now is a culture that is at last able to properly express itself and move past the revolutionary nationalism of days gone by. The future is here for Ukrainian literature. And that future is bright.