There is no sincerer love than the love of food. Come on, who doesn’t enjoy a plate (or more) of good food especially when hunger strikes you? We love the food of the Spanish, the Italian, the Japanese, the Chinese and more, but have you ever tried or heard about the Ukrainian food?

Ukraine, surrounded by diverse nations and cultures, is home to Belorussians in northern Polissia; Poles, Slovaks, Hungarians, and Romanians in western Ukraine; Moldovians and Gagauz in southern Ukraine; and Russians in eastern and northern Ukraine. When a region is so culturally diverse, there is a definite influence on the cuisine, be it traditional or modern. There is also a substantial Romani population which is scattered throughout Ukraine, and even though they are a minority population, their rich tradition and culture have definitely been reflected in some aspects of the Ukrainian culture, especially food. 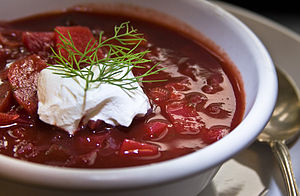 Poland, Russia or Lithuania – wherever you say it is from, the Ukrainians will proudly tell you that it originates from Ukraine, no offense people. This classic sour soup is popular in Eastern Europe and is made of beetroot which explains it’s deep ruby colour. It’s very healthy and nutritious as it tends to contain beans, beets, carrots, cabbage etc. and there’s no other dish that can be served to visitors better than the Borscht! Topping it with a scoop of sour cream or real mayo provides the already delicious soup with an even richer flavour. Bid goodbye to your usual tomato soup (sorry tomatoes) and give Borscht a try. 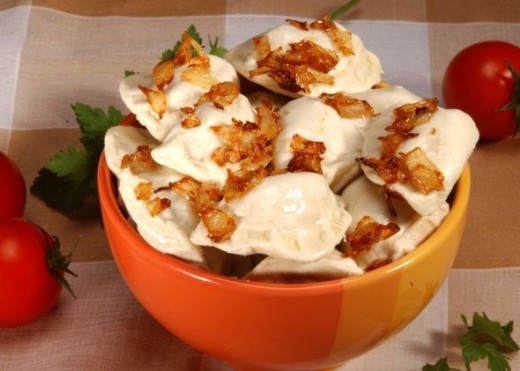 Varenyky, not to be confused with its Polish counterpart, pierogi, is one of my favourite Ukrainian dishes. Unlike pierogis, varenyky are boiled, not broiled in butter. They can be filled with meat, potatoes, sauerkraut, cheese or fruit and served with tangy sour cream or grilled onions. Needless to say, in many Ukrainian homes, the dish is reserved for special occasions as it takes hours to make them from scratch. These dough-wrapped packets of fun are a very popular Ukrainian dish and you can’t say that you’ve had Ukrainian food without trying varenyky. In Ukraine, kutia is an essential dish at the Ukrainian Christmas Eve Supper. The main ingredients used to make traditional kutia are: wheatberries, poppy seeds and honey. At times, walnuts, dried fruit and raisins are added as well. This dish should be prepared several days in advance for flavor to develop. It is very delicious and also high in nutrients. You may want to consider throwing all your Kellogg’s away and have some kutia instead.

Ukrainian holubtsi, or stuffed cabbage leaves, are the perfect warm comfort food for a chilly day. The word holubtsi literally translates as ‘little pigeons’, the reason is not really known but it could be because the cabbage looks like the wings of a pigeon that envelope the meat inside. There are many ways of serving this dish but the classic variant is holubtsi in tomato sauce complemented with sour cream. The stuffing may also vary but the most important ingredient, cabbage is indispensable.

It’s no doubt that there are many more delicious and unique Ukrainian dishes that didn’t make it to the list. Fear not, this is not the end of the list. The following list includes some notable examples of Romani food which is less known to the world. Even though Romani food is less popular, it definitely is not less delicious in any way!

It’s also known as the shepherd’s dish and is sort of like a potato stew. It is made of “young” meat, either lamb or chicken or pork. This is definitely the food to go for during the cold winter days. The goulash is a combination of meat and vegetables with a gravy that is cooked for a long period of time to tenderize the contents of the pot. The slow cooking allows for the flavours to meld together and become a big, hot pleasing bowl of yumminess on a cold night.  It is simple and hearty and, served up with a loaf of whole grain bread, is very satisfying. Traditionally, it’s cooked with rabbit or hedgehog, but chicken is fine as well.

Sodmay is a stew-like dish and is tomato based. It’s also wrapped in cabbage leaves much like the Ukrainian holubtsi, which could possibly be a hybrid of Romani and Ukrainian food. The sauce is usually made by using bell peppers, tomatoes, chopped ham and other herbs.

As we can see the Romani food looks kind of similar to dishes found in many parts of Europe. It could be because of the scattering of the Romani people all over Europe that the local dishes are sometimes assimilated into their traditional dishes. It’s hard to find much information about the Romani food or their recipes online. It could be because historically, Romani was an exclusively unwritten language, so most of the recipes are passed down verbally and it’s only recently that it’s been established as a written language.

I hope that after reading this blog post, you’ve learnt more about the Ukrainian and Romani food and are interested in trying these amazing dishes one day.